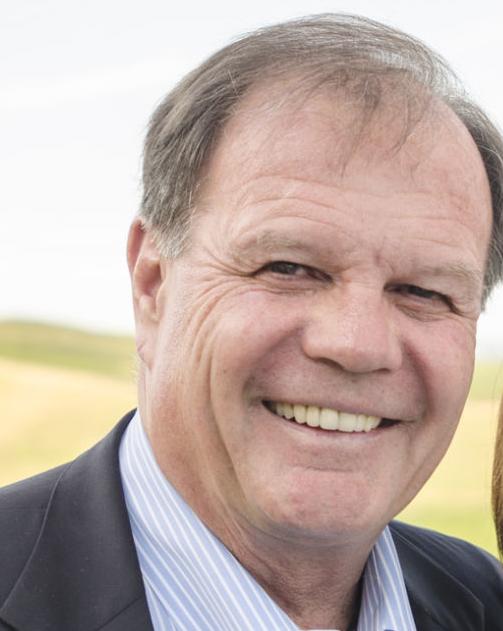 NAPA, CA (April 5, 2018) – Oak Knoll District grapegrower Steve Moulds has been named the 2018 Napa Valley Grower of the Year.  Moulds will be honored for his contributions to the Napa Valley wine industry and community on May 11 at the Napa Valley Grapegrowers 43rd Annual Dinner.

Moulds began his farming career in the early 1970s, on a ranch in Morgan Hill, raising animals to sell at auction.  During that time, he served in the Department of Social Services in Gilroy, helping Spanish-speaking migrant workers gain skills and remove barriers to employment.

The Peace Corps has played a central role in defining Moulds’s relationship to civic duty.  He has spent many years volunteering in Orocuina, Honduras, focusing on rural community and agricultural development.  Moulds was instrumental in building schools there and he established a co-operative Savings and Loan, which is still in operation.

In 2000, he and his wife Betsy moved to a beautiful property in the Oak Knoll District, where they planted 11 acres of Cabernet Sauvignon and committed themselves to producing high quality winegrapes. They forged strong relationships with winemakers and approached every agreement with the spirit of partnership and excellence.

Steve became involved in causes and efforts near and dear to his heart, dedicating hours and years to boards such as the Oak Knoll District of Napa Valley appellation, the Napa Valley Grapegrowers (where he joined the Board of Directors and served as President), and the Napa Valley Farmworker Foundation, where he currently serves as President.

Being a strong believer in community volunteerism, Steve did not stop with industry boards.  He stepped forward and immersed himself in other Napa County civic, philanthropic, political and professional endeavors, including: the Napa County Housing Commission, where he and others work to provide affordable housing for farmworkers; FFA St Helena High School, where he is a strong supporter; Men Who Give a Damn; Festival Napa Valley; and Moulds can always be found with his paddle raised at the annual Napa County Livestock Auction, supporting the children in the 4H, FFA, and Ag for Youth programs.  He purchases several animals and donates the meat to the Napa County Farmworker Housing Centers.

Moulds was born in Chicago and was raised in Palo Alto and Los Altos, California.  He completed his Bachelor of Arts from San Jose State University and in 2005, received his degree in Viticulture from the Napa Valley College.

Moulds is known for his deep concern for the plight of immigrants and he has spent his life helping anyone who is committed to dreams of a better life and a better world.  He has set a great example for his 2 children and 5 grandchildren: that of a strong work ethic and the importance of community service.

As an adventurer, he and his beloved “Clydesdales” have bicycled across the United States 4 times, travelling on 4 different routes.

Moulds is a free spirit and never says no.  He prefers to say “How?”

NVG Vice President Paul Goldberg commented on Moulds’s award by noting that, “Steve has contributed to the overall success of the Napa grape growing community in many ways.  Among numerous achievements, Steve has exhibited a long-standing commitment to sustainable and high-quality farming practices, he has helped define the role of the Farmworker Foundation in educating and improving the lives of farmworkers throughout the valley, and his service to the Grapegrowers and other community organizations has been unparalleled”.

Nominations for the Grower of the Year come from the NVG membership and the recipient is chosen by a special Selection Committee made up of Past Presidents, current leadership, and active committee members.  The award criteria are: a strong commitment to sustainable practices; recognized leadership in agricultural preservation; dedicated community focus, contributions to the Napa Valley community; and someone who actively promotes Napa’s reputation for the highest quality vineyards.

About the Napa Valley Grapegrowers:
NVG is a non-profit trade organization that has played a vital role in strengthening Napa Valley’s reputation as a world-class viticultural region for over four decades.  Its mission is to preserve and promote Napa Valley’s world-class vineyards. NVG represents over 700 Napa County grape growers and associated businesses.  For more information, visit www.napagrowers.org .